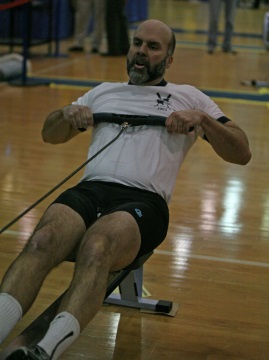 James Zeller grew up on Long Island where, during his high school years in the late 1970s to early 1980s, rowing generally did not exist. So he was introduced to the sport relatively late.

He played football in high school, and continued with it for his freshman year at Marietta College in southeast Ohio. After the season was finished, one of his football teammates suggested crew as a means to keep fit and try something new. With only a vague impression of long, skinny rowboats, he agreed.

First there was the terror of being placed in a four-man shell in a swift-flowing river on a cold, windy day in mid-November after about fifteen minutes on the rowing machine. Then there was the intimidation with the growing realization that rowing is one of the most physically demanding sports there is. These were gradually replaced with a growing respect for the sport, then pride in overcoming one after another physical or technical challenge. There also developed pride in taking on and beating teams from colleges and universities much larger than Marietta College.

But most important were two things: First was the intense satisfaction and joy that was experienced when the crew truly “swung”, where the crew was completely synchronized, the rowing became almost effortless, and the boat would literally lift higher in the water. Second was the degree of camaraderie developed among a crew that is above and beyond what is developed by any other team sport.

Coach Zeller medaled in several regattas during his college career, including the West Virginia Governor’s Cup, the Head of the Muskingum, the Southern Intercollegiate Rowing Association Championships (SIRA), the Mid American Collegiate Rowing Association Championships (MACRA), and the Philadelphia Frostbite Regatta. However, his most memorable race was missing the medals stand by less than a half-second at the Dad Vail regatta in a “Cinderella Story” JV8. He was co-captain of the Marietta College men’s crew team and winner of the “Hammer Award” for best erg score in his senior year of 1986.

Other than a brief period in the early 1990s, when he rowed recreationally with some co-workers, crew fell out of his life. Then, one day in 2006, he was cold-called by Kevin Suter, former classmate and teammate, informed that he and his family were relocating to Ashburn, and demanded to know where there was a place to row. This led to a rekindling of rowing, first for fitness, then for competition at the Master’s level; racing in singles, pairs, doubles and fours. As a Master, he has medaled at the Mid-Atlantic Erg Sprints, the Occoquan Masters Sprints and the Capital Sprints. He worked with Kevin to help get the rowing program for Briar Woods HS off the ground in 2011, and again with Stone Bridge HS since 2012.

Coach Zeller has lived in Ashburn Farm since 1990 with his wife Sharon, a college classmate and coxswain for the Marietta College women’s crew team, and their children Richard and Margaret. When he isn’t doing something rowing related, he works for the Loudoun County Department of Transportation & Capital Infrastructure. Sharon teaches 2nd grade at Cedar Lane Elementary School in Ashburn.